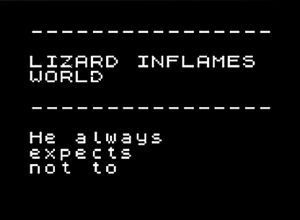 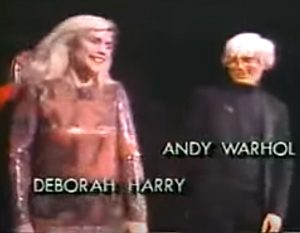 Andy Warhol performed a live advert at the Lincoln Center, New York, in July for the Commodore Amiga 1000 at its launch, where he painted Debbie Harry, of Blondie, using ProPaint on the Amiga. Commodore were in competition with Apple hence the show. Warhol also used the Amiga for a music video, ‘You are the One’. Debbie Harry’s image was captured using a video camera (in mono) and digitised, then manipulated in ProPaint. Warhol added colour by using flood fills, in a parallel to his usual screen-printing style.
Warhol said: “The thing that I like most about doing art on the computer is that it looks like my work.“.

Harold Cohen ‘Tsukuba-Expo 85’ US Pavilion, World Fair. Represented the USA with AARON, as one of four exhibits on Expert Systems 1985.

Eduardo Kac – artworks for Minitel between 1985 and 1986 for the Brazilian network, which was the same system as the French Minitel. An example is Reabracadabra (1985), a very short digital poem transferred to video. Also Tesão, a network graphic artwork.

Patric (Patricia) Prince organised and was on the committee for the SIGGRAPH Art Show (1985) for computer graphics as art. Prince is an art historian and theorist specialising in the history of computer art, and a collector and curator. Two more SIGGRAPH Traveling Art Shows followed in 1987 and 1989. These popular shows were renamed ‘Digital Image’ and ‘Digital Cinema’ in the 1990s. Patric donated 250 computer artworks to the Victoria and Albert Museum, London.

Les Immatériaux (tr. The Intangibles) –  international exhibit at the Centre Georges Pompidou, Paris, from March to July organised by Jean-François Lyotard and Thierry Chaput, with Jean-François Le Lionnais (writer). The ALAMO group (see 1981) introduced its first poems generated by computer. Interactive writing, épreuves d’écriture (tr. writing tests), music (a Stockhausen premier) and a series of film screenings  shown across 61 sites, relating to the phenomenology of the use of new technology.

Telidon Art Project – run by Shauna Jean Doherty, John Durno and others with the University of Victoria and the Canada Council. The Project has located over 10,000 35 year old Telidon art graphics created by more than 60 artists, on over 135 floppy disks and 35 VHS or Betamax videotapes, in art organisation InterAccess‘s archive (see 1983). These have been collated for a virtual exhibition, curated by Shauna Jean Doherty.

Neuron Data is an American expert system software development company founded in June by Alain Rappaport, Patrick Perez and Jean-Marie Chauvet. Their first product, Nexpert, was a C-based expert system for the Macintosh. The product was ported to the PC, one of the first programs to run under the new Windows operating system. With the name Nexpert Object it was ported to UNIX workstations, VAX VMS minis and IBM mainframes. Neuron Data later released a GUI building tool named Open Interface (1991).

Amstrad PCW word processor – Alan Sugar saw that word processing was the most popular use, after games.  These are main market segments – games (kids, generally)  and business (adults, students -the origin of the home office?), then utilities, programming and art. Geoff Davis  (Micro Arts) learnt C on a PCW in 1988. The PCW 8256 was launched in September, with 256 KB of RAM and a floppy disk drive, quickly followed by the PCW 8512.  Both systems had three units, printer, keyboard, and monochrome CRT monitor, whose casing contained most of the hardware. Very popular. Described by the press as ‘the bargain of the decade‘.
Sold in Germany by Schneider as Joyce and Joyce Plus, named after Sugar’s secretary (this was also the development name).

Atari releases the low cost Atari ST including MIDI ports to control external hardware (racks usually or keyboards), making it very popular with musicians. This advanced computer was part of a mid-1980s generation of home computers with 16-bit or 32-bit processors, 256 Kb or more of RAM, and mouse-controlled graphical user interfaces. Other similar specification computers were the Macintosh, Amiga, Apple IIGS, and in some markets the Acorn Archimedes.

Fifth Generation AI machines – the global market for ‘expert systems’ (AI) was over a billion dollars. Japan’s ‘fifth generation’ computer project encouraged the British and US governments to invest in more academic research.

Lisp Machines – category of computer specifically designed to run the programming language Lisp (also LISP, for LISt Processor), to more efficiently run expert system and AI software. This was a single user design, unlike all other mini and larger computers which were time-sharing. Typical systems also had windows, raster graphics, mice, and other advanced features including laser printing. The market collapsed in 1987, and AI entered another ‘winter’, with a lack of funding for research.

Microsoft Excel released the first version of Excel (based on Multiplan 1982) for the Macintosh in September, and the Windows version in November 1987. The more advanced Lotus 1-2-3 was a competitor that combined spreadsheet, database, and charting. This was also very popular in the 1980s.

AR: The City released. A role-playing video game series created by Philip Price, and published by Datasoft. The player becomes a new character and enters an ‘Alternate Reality’. Quickly became a cult game.

Paradroid – Commodore 64 game by Andrew Braybrook. It is a shooting game with puzzle elements. Excellent name.

Demoscene – computer art subculture making ‘demos’. These are small computer programs to create audio-visual presentations. The purpose is to display programming skills, visual art, and music. Originated when Charles Deenen, later of the Maniacs of Noise, used a Commodore C64 to add colour graphics and music to ‘cracked’ videos. The international demoscene took off in 1986.

MOMA (The Museum of Modern Art) NY USA – Music Video: The Industry And Its Fringes was the first exhibition of digitally effected video, along with old film classics. Curated by the Department of Film.

In April, Max Headroom was introduced, the British AI fictional character created by George Stone, Annabel Jankel and Rocky Morton, and portrayed by Canadian-American actor Matt Frewer. Though he was called the “first computer generated TV personality,” the look of Max Headroom was conceived with prosthetic make up, lighting and a blue screen background. The character also appeared in other TV series, books, the music video and song ‘Paranoimia’ by English band Art of Noise and in advertisements, including for Coca Cola, and for Channel 4 in 2007, and in a cameo in the film Pixels in 2015.

Frankie Goes to Hollywood video game released by Ocean Software Ltd for Amstrad CPC, Commodore 64 and ZX Spectrum. Based on the Liverpool band Frankie Goes to Hollywood, who were successful during the 1980s. It was based on their music and their imagery – it was set in the ‘Pleasuredome’ in Liverpool, using the music ‘Relax,’ ‘Welcome to the Pleasuredome,’ and ‘Two Tribes’.

Electronic Music – in 1985, Barry Vercoe of MIT made a version of the program ‘MUSIC’ that could be compiled for any computer that ran the C programming language. Soon ‘Csound’ was available on Macintosh and PC computers and is now the standard synthesis language nearly everywhere.

Csound uses range from simple applications that emulate popular hardware of the past (complete with an interface image of the original, this mimicry is called skeuomorphism) through Reaktor, which allows the design of virtual instruments with a modular flavor, to Max/MSP which shows and edits flowcharts of complex logical and DSP systems.