Micro Arts Group was founded in 1984 by Geoff Davis along with an international group of young artists and programmers. It released computer generated art, conceptual pieces and story generators on data cassettes and pre-internet Prestel (like Minitel) teletext, and provided a forum for computer artists and musicians.

Low cost readily available microcomputers were used to create generative, text and conceptual art for distribution to the public. This was the first time computer art appeared outside of academia or research labs.

It was well reviewed in the mainstream computer press such as Computer News, Personal Computer World, Blitz fashion magazine, A&B Computing, Sinclair User  and Acorn User. The microcomputers used were the Sinclair Spectrum and the BBC Micro, iconic machines from the early 1980s, plus other art using the Quantel Paintbox, the first computer graphics machine.

There was also an educational print magazine which published the first Quantel art ever created in 1984. We also did idents for the London pirate TV broadcaster Network21.

We are featured in the Computer Arts Archive

There is a detailed book History of Micro Arts 1984-85

There were many art history firsts:

Micro Arts was revived in 2019 by Prof. Sean Clark. He has organised several exhibitions with the Computer Arts Archive (part of CAS). The British Computer Society, Moorgate, London, is exhibiting works until October 2022. Previous shows include LCB Depot Leicester (2021) and the London Film-Makers Co-op (1985).

New art combining generative art and video has been released at NFTs on KnownOrigin.

Micro Arts was well reviewed in the computer press at the time. Geoff Davis went on to teach and research computer graphics and generated text at Sheffield art college, Middlesex University (Cat Hill), and the London Institute (now UAL).

For news of AI research, the forthcoming AI fiction anthology, and a new novel Circular River, please visit the Geoff Davis website. (Not to be confused with Jeff Davis USA.)

The 1980s were a time of great change in computer technology, reflected in art production. Micro Arts was not academic or involved in the private gallery commercial art system. There was no interest from galleries at the time unlike now. It was exhibited at the London Film-Makers Co-operative in 1985, where Geoff occasionally worked.

The computer art was programmed for consumer micro computers, the ZX Spectrum and BBC Micro.  Commodore, Apple and IBM PC versions were not released.  There was also a wide-ranging print magazine. Prestel release was via Micronet 800, editor David Babsky.

New work using the generative art with 3D videos and music, with Patryk Jaworski of Etalon, has been released at NFTs on KnownOrigin – 3D Cube NFT Collection. This is ahead of a music and VR Metaverse release for 2023 under the working title UNOME.

There is a detailed book History of Micro Arts 1984-85 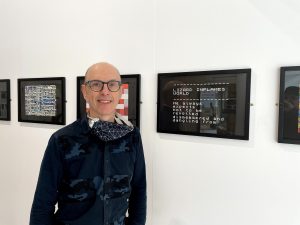 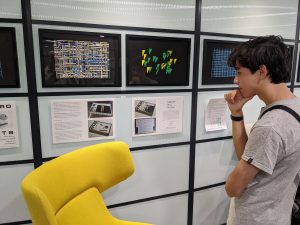 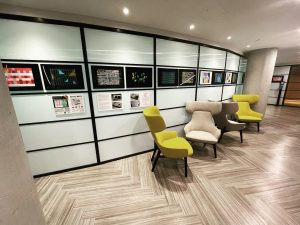 This is our second recent exhibition, the last was at LCB Depot, Leicester – see photos below, Geoff Davis and documentary maker and 3D videographer Patryk Jaworsky  at a later music event (left).

The Spectrum programs were run on emulators on a PC. Speccy is the one most recently used. The old Spectrum programs are only saved as snapshot files (.sna). We have used various palettes for different purposes. Now we have p5.js versions which are different to the originals. These will be on our new genartists.com website.

Geoff Davis had been communicating (by letter) with American computer artist Harold Cohen who produced computer art using small floor robots, called turtles. He was approached to write something about his work and computer art for the Magazine. This never happened. His comment was that everything depended on marketing. How true!

Text and story generation has progressed from simulated chat systems and the Turing Test (such as ELIZA, 1964), to James Ryan’s Sheldon County (2018), a procedurally generated fiction that is converted using a speech generator into a unique podcast for each listener.  His program Hennepin uses the ‘world’s biggest spreadsheet’ to generate the fictional worlds.

Micro Arts MA4: Cow Boils Head story generator program (Geoff Davis, 1985) also used a dataset (many lists of words linked to each word in a seed story) to generate stories. This was a simple method to suit the small memory of the micro computer.